Hi, there, in this sequence of events, you will see a lot of action photography of two leopards fighting. Browse through the photos of this leopard fight, and at the end of the series, you can decide if this were two male leopards or a mating fight between a male and female.

I used my Canon 1D MKIV, with a Canon 500mm F4 IS USM lens and in the few seconds of this fight, I took over a 100 photos. There were so many pictures, that I have compiled an AV with all of them, at +/- 10 photos per second. Although it was surely not the best lightning conditions, it was still a once in a lifetime opportunity to see the vicious fight between these two leopards. It all happened approximately 45 meters from our vehicle, where we were watching this drama unfold right in front of our eyes. 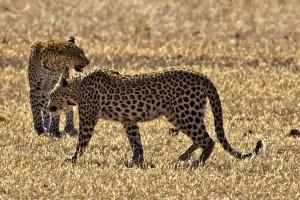 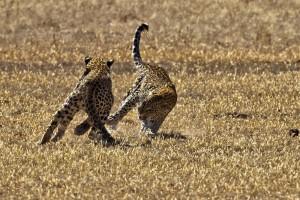 We were driving in the Auob River in the Kgalagadi in the direction of Mata Mata at +- 14:00PM. The next moment we saw one leopard walking towards Mata-Mata in a north western direction, in the Auob River bed. It passed a few Blue Wildebeest and did not show any interest in them at all. That was very strange, and our opportunity of photographing a kill that day, went right out of the window! It seemed as if the leopard was trying to avoid the Blue Wildebeest, as if he was on a mission of his own to the north. 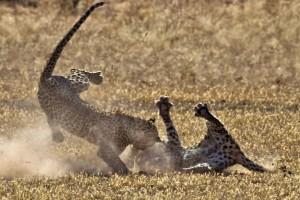 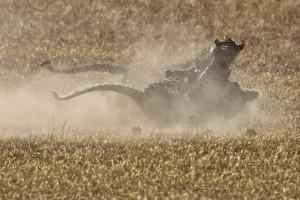 A few hundred meters further on, it suddenly stopped, and this was the moment that we saw the second leopard that walked down the river bed in a south eastern direction to Twee Rivieren. They were approaching one another… Both the leopards left the rocky side of the river bank and came straight to our direction in an open space in the riverbed. 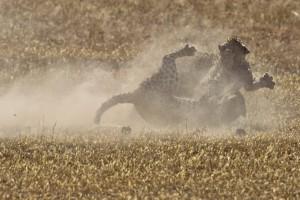 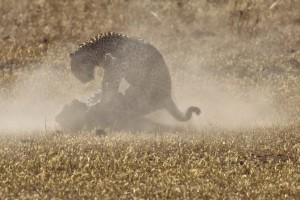 The next moment, all hell break loose, and all you could hear was these strange growling noises and a lot of dust, and of course, by that time, the Cannon 1D MKIV consumed the memory cards at 10 photos a second! This was both exciting and scary, when you clearly hear the growling sounds that they make. The earth was literality trembling underneath our vehicle. It seemed like a fight for territory at first. 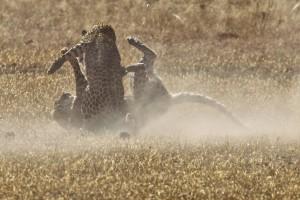 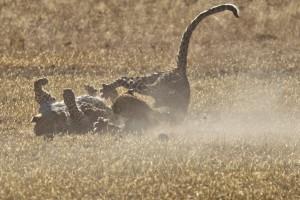 This was action at its best, and we were only a few vehicles at that particular time and place to see this leopard fight. How lucky could we be? Pandemonium breaks loose in the vehicle as well, with all three photographers trying to get the best shot. 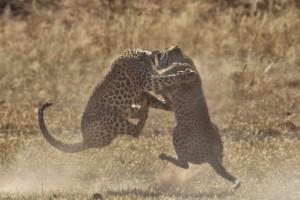 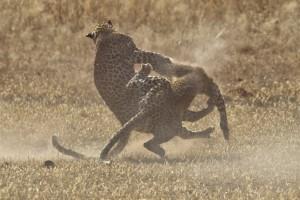 They fight for a few seconds, then break lose. The one walked away and then they were at it again, growling and snarling and again, a lot of dust was surrounding them in the air. They break lose again and round two was over as quick as it has began. 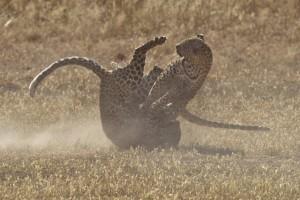 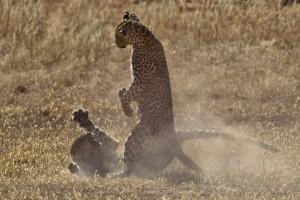 We were waiting for round three of the fight to begin, when we saw that the one leopard was retreating and submitting to the stronger one. My wife immediately picked it up, and suggested that the submissive one is a female! Her ears were flattened to the back of her head, and sort of “humbled” herself to the male, between the fights. 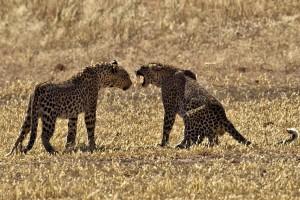 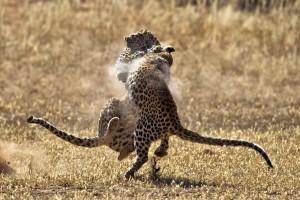 Then the fight started all over again… She was so brave, and fought like a true warrior, not backing off at all during each fight. The longer we have watched them fight, the more convince we became that it was a mating fight! But we were so wrong! We were quite surprised to learn that it was indeed two females. 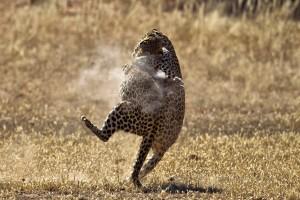 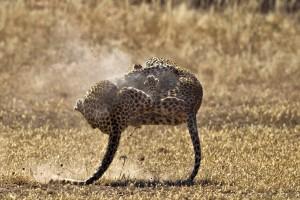 According to Dr Matthew Schurch of the Kgalagadi Leopard Project, this fight actually took place between two female leopards named Miera and Tsamma. Read more on the  Wild Card Blog 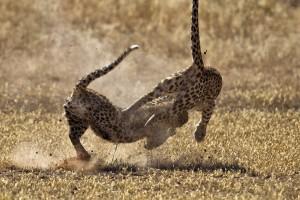 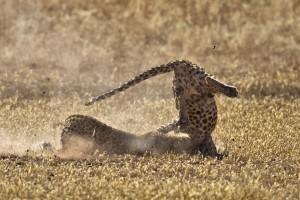 Now let’s us learn something more about our two remarkable Leopard fighters. Leopards are part of the cat species that is closely related to jaguars, tigers, and lions. It is the smallest of the four big cats but pound for pound leopards are the strongest of them all. Leopards are nocturnal animals, meaning they are active at night. 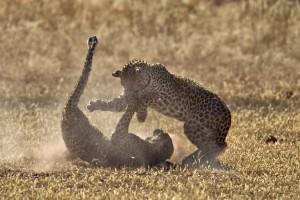 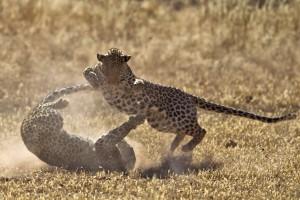 A leopard’s body is built for hunting. They have sleek, powerful bodies and can run at speeds of up to 55 kilometers per hour. They have excellent ambushing skills, and their coat color and rosette patterns help them to better camouflage in the bush and trees. They are also excellent swimmers and climbers and can leap and jump long distances. By dragging the bodies of large animals up in trees, it keeps their prey safe from scavengers such as Lions and Hyena’s. 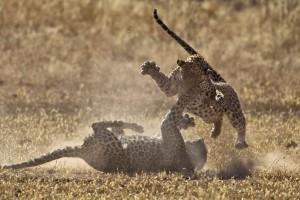 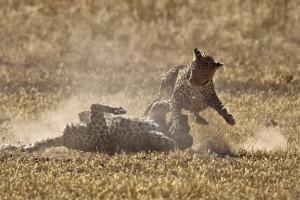 Leopards are basically solitary animals and go out of their way to avoid one another. They only spend time with others when they are mating. Each animal has a home territory that overlaps with its neighbors; the male’s territory is much larger and generally overlaps with those of several females. Unexpected encounters between leopards can lead to fights (As shown). 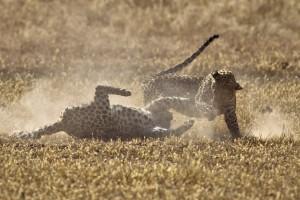 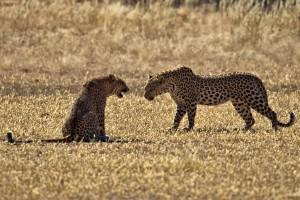 Female leopards give birth any time during the year. They normally have two grayish cubs with barely visible spots. Leopard cubs are born blind, and are completely dependent on their mothers. Their eyes begin to open after about ten or more days, and for the first few months their eyes are bright blue. 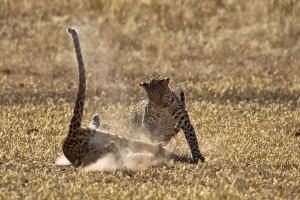 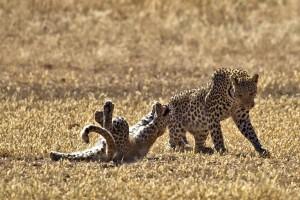 The mother hides her cubs and moves them from one safe location to the next, until they are old enough to begin playing. Cubs normally live with their mothers for about two years. In these two years they are trained by mom to be super killers to survive in this harsh environment.

This page is dedicated to late Gavin Harris who was with us when we experienced this magical event of the two leopards fighting. It took place in the Kgalagadi in South Africa, the day before we were supposed to head back home. What a way to conclude ones holiday!